Porsche Carrera Cup GB – the fastest single marque GT racing championship in the UK – entered the second half of the 2020 season with a visit to the fastest circuit on the calendar, Thruxton, for Rounds Nine and 10 of the championship. Porsche GB 2020 / 2021 Junior Harry King (Team Parker Racing) set the pace on Friday – topping both Practice sessions by lapping approximately one-second faster than his rivals. Lorcan Hanafin (JTR) showed strong form to end the day second in the combined times, teammate Sam MacLeod (JTR) was third. Esmee Hawkey (Team Parker) was the fastest Pro-Am driver in both sessions, John Ferguson (Team Redline Racing) topped Am. 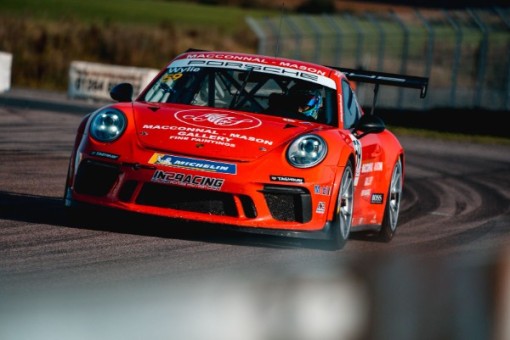 Qualifying
Saturday’s 30-minute qualifying session was conducted in dry conditions and began with Rookie Will Martin (Richardson Racing) setting the initial pace at the top of the timesheet – Webster and Hanafin kept him firmly in their sights. With a little over 15-minutes left on the clock, Porsche GB Junior King set a time good enough to usurp Martin, King soon improved further to sit an impressive 0.607secs ahead. In Pro-Am, Hawkey lapped quicker than championship rival Ryan Ratcliffe (Team Parker), in Am Justin Sherwood (Team Parker Racing) and Ferguson traded fastest category lap times.

In the latter stages of the session Scott McKenna (Redline Racing) and teammate Matthew Graham (Redline Racing) improved to move inside the top five, but for his incident during Round 8, Graham would serve a three place grid penalty for Round 9 – leaving him P7. In the dying moments of the session, drama unfolded when Webster lapped to within less than a tenth of a second of Porsche GB Junior King but had his time deleted due to exceeding track limits.

Race one
The first of Sunday’s two races took place in dry conditions over a 20 lap distance. Porsche GB Junior King maintained his lead off the line, Martin moved into second and Webster third – Hanafin was relegated to fifth. In the Pro-Am battle it was Aaron Mason (Brookspeed Connect IT) who emerged from the opening lap ahead of rivals Hawkey and Ratcliffe. In Am it was Ferguson leading Sherwood from Armstrong. As early as the second lap Webster began troubling Martin ahead, the pair ran side-by-side at one point but the Rookie maintained his advantage.

On lap 4 Sherwood found a way by Ferguson at Club chicane in what would become a race-long scrap. A similarly close fight in Pro-Am saw Mason, Hawkey and Ratcliffe running nose-to-tail with little to separate them. On lap 7, MacLeod came under a sustained attack from Graham, at the end of lap 8 the Scotsman locked-up approaching Club, this allowed Graham a run on him across the start/finish straight. As the pair fought for the same piece of track into Allard there was contact resulting in both competitors making their retirements. At the same time, Hawkey adopted the lead of the Pro-Am category, a chasing Mason then made an error by putting two wheels on off the track, as Ratcliffe subsequently overtook him they made contact which resulted in Mason’s immediate retirement.

On lap 11 Webster finally overtook Martin for second place, but Martin soon retook the position with a clean move before Allard. The gap ahead to Porsche GB Junior King was now 8.8secs. In Pro-Am Ratcliffe dropped down the order due to damage from the incident with Mason, in Am Ferguson was now ahead of Sherwood in their titanic fight, Armstrong in third came under intense pressure from Lee Frost (Simon Green Motorsport) for the final category podium spot, teammate Lucky Khera (Simon Green Motorsport) kept them in view.

With two laps of racing remaining, Porsche GB Junior King suffered a puncture causing him to drive slowly back to the pits where he retired from the race. The incident saw Martin take the lead of the race, Webster still in close pursuit, Hanafin moved into the final podium position – Martin took the checkered flag to take his maiden Porsche Carrera Cup GB victory. Hawkey’s Pro-Am category win was her sixth of the season, Ferguson kept Sherwood at bay to the flag – as they crossed the line 0.176secs split them – Ferguson’s result was his second Am win of 2020, Frost came home third.

For recording the fastest lap in each of their respective categories, Porsche GB Junior King – Pro, Ratcliffe – Pro-Am and Ferguson – Am each received one additional championship point. As part of the 2020 podium procedure, winner Martin selected at random the number five ball, which reversed the grid positions of the top five overall race finishers from Round Nine. This made the front row for Round 10 McKenna and Ross Wylie (IN2 Racing), with Hanafin and Webster on row two, Martin on row three. Championship leader Porsche GB Junior King – now just 10 points ahead – would start Race Two in seventh – behind the final classified finisher in his category – Pro.

Following the race MacLeod was given a five-place grid penalty for Round 10 as a result of his incident with Graham in Round Nine. Khera withdrew from the remainder of the weekend.

Race two
Sunday’s second race was also conducted in dry conditions and run to a 20 lap distance. Hanafin made a good getaway during the first phase of the start, but it was Wylie who immediately made up a position off the line – passing reverse grid polesitter McKenna for the lead of the race. Also making up places, Porsche GB Junior King got a run on teammate Webster further into the first lap, snatching fifth before setting after Race One winner, Martin. As soon as lap two the Junior passed Martin for P4, Webster quickly followed him through. In Pro-Am Hawkey led Mason from Ratcliffe. Sherwood headed Ferguson and Frost in Am. Fellow Am runner Armstrong left the circuit early into the race resulting in his retirement. Pro driver McLeod also suffered an issue, spinning onto the grass before rejoining the circuit to continue his race.

On lap 3 Porsche Junior King overtook Hanafin through the Campbell, Cobb and Seagrave complex. Continuing his march forwards through the pack, Porsche GB Junior King soon found a way by McKenna up the inside through Goodwood for second spot. Webster then overtook Hanafin for fourth before pinching third from McKenna, making the order at the front: Wylie, Porsche GB Junior King, and Webster. On lap 10 the charging Junior completed his run, grabbing the race lead from Wylie in a move through Cobb. In Pro-Am Hawkey maintained her category lead with Ratcliffe now second, Mason third.

Drama came on lap 14 when Porsche GB Junior King suffered a puncture – an exact replica of his exit from Race One. This allowed Wylie back into the lead of the race with Webster second and McKenna third. Shortly afterwards Graham was forced into the pits with a puncture. Continuing their battle from Round Nine, on lap 16 Ferguson passed Sherwood for the Am category lead. In the final few laps of the race a further shock came when McKenna and Webster also suffered punctures – both limping their cars back to the pits for wheel and tyre changes.

Having paced himself throughout the race, Wylie took the flag to claim his maiden Porsche Carrera Cup GB victory, he was joined on the podium by Hanafin and a delighted Martin – his second visit to the podium that day. Finishing fourth overall, Hawkey took her seventh Pro-Am category win of 2020, Ratcliffe finished second, Mason third. Just as they had in Race One, Ferguson and Sherwood crossed the line in close formation, Ferguson taking Am category victory, Frost took his second podium result of the weekend. Returning to the track to complete his race, Webster was classified P11, fifth in the Pro category, claiming vital points.

For recording the fastest lap in each of their respective categories, King – Pro, Hawkey – Pro-Am and Sherwood – Am each received one additional championship point. For his performance, Martin earned the Driver of the Weekend accolade, IN2 Racing were awarded Team of the Weekend.

Porsche Carrera Cup GB travels to the ‘home of British Motor Racing’ – Silverstone – for Rounds 11 and 12 of the championship on 26-27 September. Webster secured a podium result at Silverstone in 2019, Pro-Am driver Mason took an impressive fourth place finish overall and category victory in mixed conditions, while Am contender Sherwood took one Am win – and an overall podium – on his way to securing the category title during the same weekend. In 2019 Porsche GB Junior King recorded two victories at the circuit in his junior career, he arrives at Silverstone with his championship advantage to Webster reduced to just 7 points – King will want to reestablish his dominance on the championship with three weekends remaining on the 2020 calendar.