A few hours after scoring the first pole position of his Porsche GT3 Cup Challenge USA by Yokohama career, 17-year-old Riley Dickinson went on to take his first career victory in the penultimate round of the 2019 season. 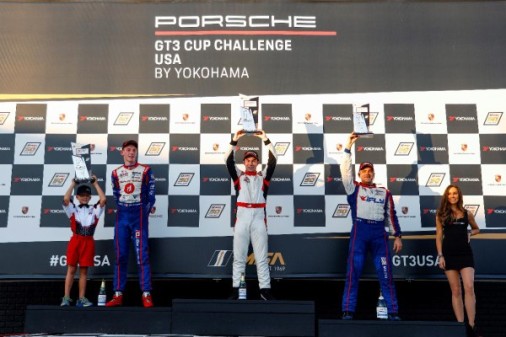 Dickinson led from start to finish but had to hold off Roman De Angelis in the No. 79 Kelly-Moss Road and Race Porsche throughout. The youngster from New Braunfels, Texas, beat De Angelis to the line by 1.060 seconds.

“It feels great,” Dickinson said. “I mean, the entire team, we were working so hard pushing for this. It’s pretty cool to get it on the final weekend. We’ll push hard tomorrow and see what we can do.

“In the beginning, I was able to get a little bit of a gap, but lapped traffic still made it interesting. It was good. Roman kept me honest throughout the race.”

The runner-up result for De Angelis was more than enough to give the Canadian the 2019 GT3 Cup Challenge USA championship in the Platinum Cup class for Porsche 911 GT3 Cup cars built between 2017 and 2019. With one race still to come Friday morning, De Angelis holds an insurmountable, 62-point lead over No. 7 Wright Racing Porsche driver Max Root with a maximum of 35 points still available.

It’s the second championship in the matter of a few weeks for De Angelis, who last month wrapped up the Porsche GT3 Cup Challenge Canada by Yokohama championship.

“It feels good and I think it’ll feel even better tomorrow,” De Angelis said. “Hopefully, I can get another win. I was looking forward to hopefully grabbing one today, but I couldn’t pull it off — good job to Riley. I can’t thank the Racing for Children’s, Medical Properties Trust, Kelly-Moss, Children’s Hospital of Alabama team enough to put their trust in me again to run the car in 2019.

“After a bit of a struggle last year, we were able to one-up it off my good friend, Trenton Estep (the 2018 Platinum Cup champion). I can’t be happier right now. We won the Canadian and American and I think we’re the first one to do that, so I think that’s pretty huge.”

Alan Metni rounded out the Platinum Cup podium with a third-place showing in the No. 99 AM Motorsports/Kelly-Moss Porsche, prevailing in a heated battle for much of the race with Root. Metni also picked up his seventh victory of the season in the Platinum Masters class for drivers 45 years of age and over.

“Both of those are satisfying,” Metni said. “Max did an incredible job. He raced like a gentleman, and I know it had to be frustrating for him because I had an advantage on the brakes [all Platinum Masters cars have antilock braking systems]. But he did a phenomenal job, and I thank him for a great, fun race.”

The win coupled with a 12th-place class finish by Fred Poordad in the No. 20 Wright Motorsports Porsche means that Metni will wrap up his second consecutive Platinum Masters title as soon as he rolls off the starting grid for the race tomorrow morning.

Jeff Mosing finished second in Platinum Masters aboard the No. 68 Topp Racing Porsche, while Bill Smith made it two Topp cars on the podium with a third-place class run in the No. 42 Kung Fu Saloon Porsche.

Another Masters class driver, David Brule, was the winner of the Yokohama Hard Charger Award as the Platinum Cup driver who improved the most overall positions from start to finish in Race 1. Brule drove the No. 48 Kelly-Moss Racing Porsche from 20th on the starting grid to 14th at the checkered flag.

In the Gold Cup class for Porsche 911 GT3 Cup cars built between 2014 and 2016, Sebastian Carazo claimed his 11th class victory of the season and wrapped up the season championship in the No. 27 NGT Motorsport Porsche. Carazo also has finished on the podium in all 15 races this season and now leads Rob Ferriol by 50 points, 511-461.

Ferriol finished second in Gold Cup the No. 5 Moorespeed Porsche ahead of Curt Swearingin, who finished third in the No. 17 ACI Motorsports Porsche.

The 2019 Porsche GT3 Cup Challenge USA by Yokohama season draws to a close with one more 45-minute race beginning at 10:10 a.m. ET Friday.